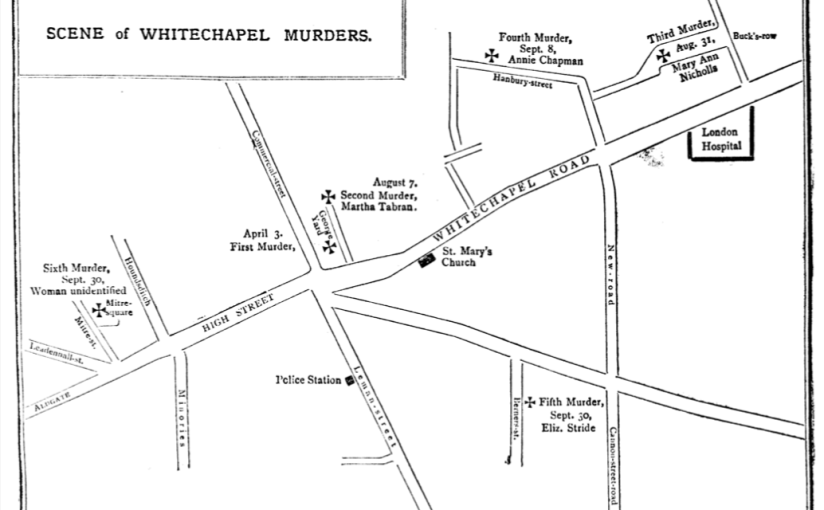 With such persistent interest and fascination in the Whitechapel murders, it must be asked: why?  What is it about Jack the Ripper and his murders that have grabbed people’s attention for so long?  This series of posts are exploring this question and what it can tell us about people’s fixation on sex and murder and each post has focused on a different point.  This particular post will be looking at the importance the location of the murders had on the reading public’s interest.  Whitechapel and the East End of London as a whole was an area with a dark reputation; a place thought to breed immorality and thus the geographical alternative to what the common prostitute represented for society. END_OF_DOCUMENT_TOKEN_TO_BE_REPLACED

Jack the Ripper and The Whitechapel Murders have been a source of fascination for society for well over a century now.  From the high circulation numbers of newspapers at the time to books and videos today, there is huge interest the murders.  There are multiple aspects that have caused this, such as the mystery surrounding the murders which I covered in more detail in the previous post.  One other aspect of this allurement was the murders’ connection to sex which, both at the time of the murders themselves and today has always captivated audiences. END_OF_DOCUMENT_TOKEN_TO_BE_REPLACED

Society has been fascinated with the Jack the Ripper murders for over a century now.  In 1888, the Whitechapel murders generated circulation that was unheard of for newspapers at that time and remains a source of fascination even today.  There are various aspects that caught the imagination of Victorian society and continue to do so today.  Firstly, one reason for the allurement of Jack the Ripper was due to the fact that he was never caught.  The police arrested and interrogated 130 suspects, but they were never able to find out who Jack the Ripper was;[1] as such the mystery around who Jack the Ripper was remained unsolved.  Secondly, the Whitechapel murders involved two topics that, throughout history, has always drawn people’s attention: Sex and murder. END_OF_DOCUMENT_TOKEN_TO_BE_REPLACED