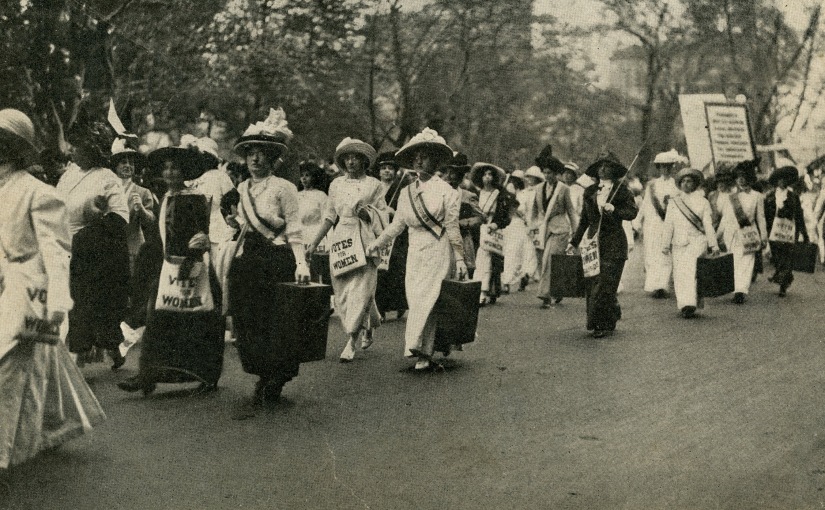 This article is continuing on from the first part of this series in which I am exploring the various areas that the women’s movement worked to progress and change.  Inspired by the centenary of some women gaining the vote and an older essay, I wanted to explore the multifaceted and fascinating depth and reach that the Women’s Movement had through the 19th and early 20th Centuries.

As stated in the introduction to the first part of this series, the Women’s Movement was not limited to the fight for suffrage.  There were many different areas that different groups and different individual suffragists were involved in.  Part 2 is focused on the ways that suffragists attempted to change and manage societal attitudes and perceptions.

During the majority of the time period explored here there was a general expectation that women from the middle and upper classes were expected to remain at home and focus on looking after the home whilst caring for and being the good moral influence for the whole family.  This role was widely known as the “angel in the home;” a role that many suffragists, rather than trying to change that impression altogether, used it to present why it was essential that women were emancipated and brought fully into the public sphere.  There were several advantages to this tactic, rather than trying to fight against an entire society’s belief system and, thereby, creating a too antagonistic cause to ever be accepted, they used it to present a necessary role that they needed to fill.  Through such work they provided society a valid reason for women to have a more influential public role, using society’s own attitudes towards gender roles to initiate the necessary changes; providing a concrete and necessary position for women to fill.

Many of these campaigns focused on promoting female characteristics that the public sphere was perceived as lacking: morality, chastity and nurturance.[1]  Philanthropy, therefore, became one of the earliest arenas within the public sphere in which women made their own; taking advantage of its clear links to important feminine characteristics.  Through hard work of suffragists who promoted this idea, and the women who worked with various charities in different capacities, they were able to begin to change society’s perceptions regarding women’s position outside the family home.[2]

In part 1 I mentioned Josephine Butler’s campaign to repeal the Contagious Diseases Acts; her work and the work of those who joined her in the National Association for the Repeal of the Contagious Diseases Acts became a turning point in the history of the women’s movement and, in particular, in popular perceptions of gender roles.[3]  Butler’s work allowed for the opportunity for more women within various organisations to tackle such topics that were previously perceived as inaccessible.  One example of the new areas in which they could begin to campaign for was social purity; organisations such as the National Vigilance Association (NVA) began to appear which focused on issues regarding public and sexual morality; white slavery, or, trafficking; prostitution; obscenity; and many other similar causes.[4]

The NVA was created in response to the exposé mentioned in part 1 by the Pall Mall Gazette, “The Maiden Tribute and the Modern Babylon.”  The organisation did extensive work in trying to curtail and prevent white slavery, an issue which, thanks to the “The Maiden Tribute” articles had become a major public concern.[5]  It was also very much focused on social purity and public and sexual morality in the public sphere; an aspect that made the NVA and others like it very unpopular.  The NVA tried to close down brothels and prevent prostitutes and their clients from being able to meet and, importantly, they demanded a higher level of morality of the men in society.  Up until this point, it was customary only for women to be highly moral; women were expected to only have sexual relations with one man and only after they were married; men, however were not tied to such restrictions as it was believed that it was in their nature to be promiscuous.  The NVA and other social purity organisations disagreed with this view and demanded that men be held to the same standards that women were.[6]  To accomplish this, they applied pressure on the authorities to further criminalise prostitution and attempted to obstruct prostitutes and their clients from meeting through appearing at locations that were commonly used for such occasions such as theatres.

The NVA and other similar organisations also tried to change attitudes via sex education.  It was felt that to ease the strains within marriages was to introduce better sex education not only for boys but also for girls.  Social purists argued that if boys were educated to respect their wives and their wishes then marriages would become less of a burden for women.[7]  They also argued that it was necessary to better prepare girls for what they were to experience when they were married; writers of the time such as Sarah Grand demonstrated that it was often the girls’ naivete that led to much of the misery and shock that women endured when they got married.[8]  Due to the nature of this aspect the campaigns were directed at various groups; not only did they apply pressure to authorities but they also directed their attentions to parents to encourage them to educate and prepare their children for adulthood and married life.

As I stated in part 1, this is by no means an exhaustive list of the ways in which the Women’s Movement worked to adjust and change society’s attitudes and perceptions, but it does provide an overview and a better idea of what areas the movement worked in.  In part 3 I will be covering the ways that the movement worked to improve the opportunities available to women during the 19th and early 20th Centuries.

[4] “Records of the National Vigilance Association,” The National Archives, The Women’s Library, http://discovery.nationalarchives.gov.uk/details/r/b2aa2b6c-d248-48d1-9787-d3acca2a38e9.

A history lover whose main areas of interest are with gender, sexuality and sex in the Victorian times. I am a PhD student from the UK who focuses on fallen women and masculinity within the Victorian period. View all posts by History Gal

2 thoughts on “The Women’s Movement: Attitudes and perceptions”